The other monday, again.

Our next Pub Scrawl is next monday, March the 07th, at 20:30 GMT in McSwiggans, Woodquay. We're in need of a topic, if anyone wants to throw one out. Even if you don't come and would like to see the Scrawlers tackle your suggestion, let us know with a reply to this post!

I'm sure I had stuff on my mind to recommend this week, but I'm awfully distracted - the chaos of "Student Week" is slowly exploding all around us here in Galway. At least next week will be nice and quiet, and we can Pubscrawl in peace. :)

Here's a few links, just throwing them out at the last minute...

Skottie Young & Scott Morse just started a new blog here : skottiescott.com, where the two of them riff on an art topic everyday. You can also buy the originals, if you have $100 to spare. Take a look, you might actually be tempted! I know I have been, and it's only been on the go 2 weeks.

This blog, Editorial Explanations is hilarious. It may not be massively relevant to our mainly Irish audience, but have a look, stick it in your google reader, get a chuckle.

And I may have plugged Comic Twart, before - I'm not sure - but if you're not looking at it you're missing out on some fantastic artwork, every week.

That's it, hopefully this will keep you entertained til the next Pub Scrawl!
Posted by Unknown at 11:51 PM 2 comments

Thanks to the efforts of the very fine Keith McNamara, we have pictures from Mondays Pub Scrawl! Bickety BAM! 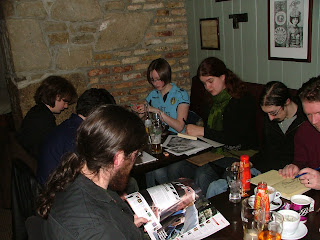 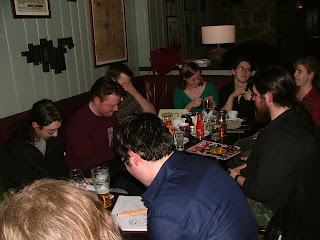 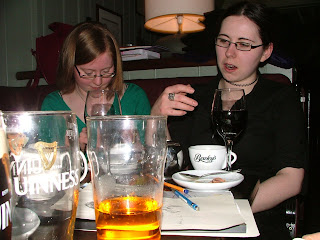 Up close and personal to... Me! 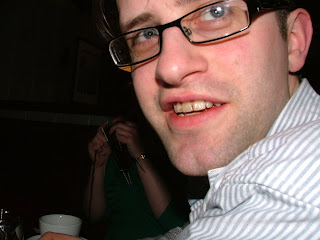 Dermo has a sneeze... or something? I don't know what was wrong with him here. 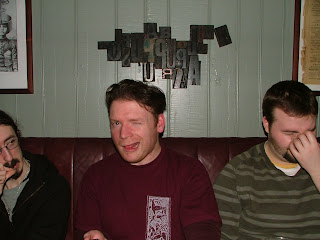 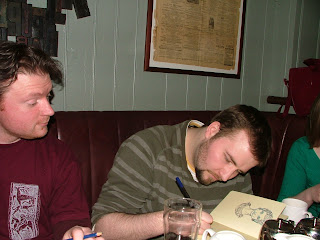 Yolande knits - it's not all drawing here! 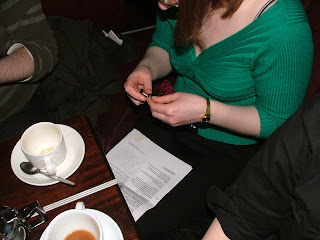 Kevin has to stop for a think. 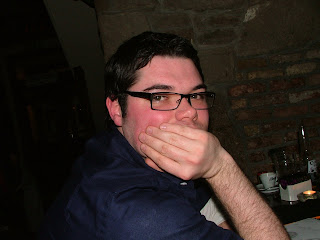 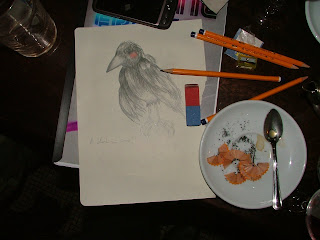 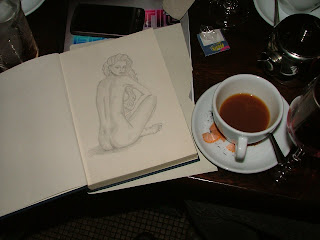 Jenny is away with the fairies 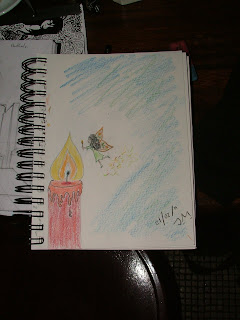 Early work from Oisin - do I see some Pandas appearing? 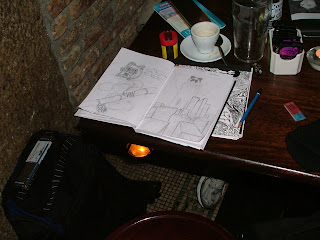 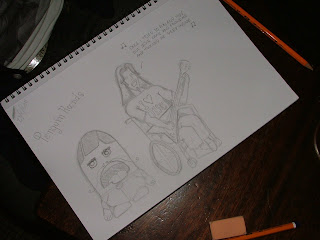 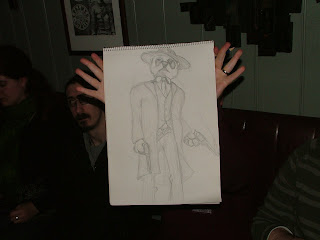 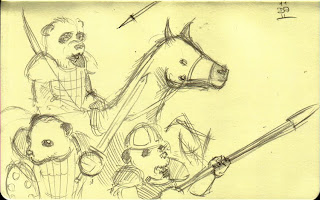 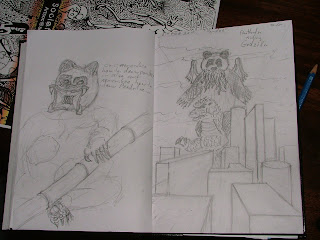 A more ruminatory Panda from Patrick 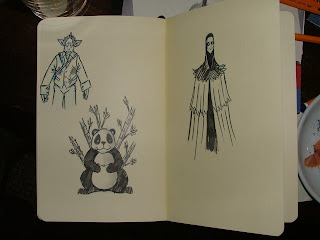 Jenny is away with Angel Wings! 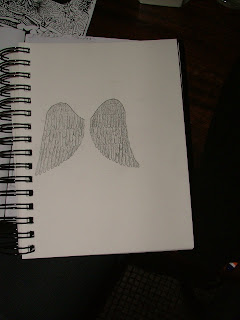 That's it for the Pub Scrawl #35 and that's pretty much it for February!
donalfall OUT!
Posted by Unknown at 11:58 PM 1 comments

Well done to everyone for braving the schizophrenic weather and the Rag Week crowds (I forgot it was Rag Week when scheduling. I would almost have had a 1 month hiatus to avoid it) to come to the Pub Scrawl! A lot of fun was had & talked about, from Irish to Bacon Sandwiches to Rag Weekers.

I forgot my damn camera again, and the Cell phone pics are too rubbish to do justice to our talented Scrawlers. Luckily, Keith was on hand with his fine camera to take a few snaps of the peoples work. I will have them up the second he emails them on to me!

Meanwhile, keep the next Scrawl in mind - 7th of March 2011! Back into McSwiggans at half eight for more drawing, drinking & fun.
Posted by Unknown at 11:56 PM 0 comments

Super quick follow up - I can't believe I forgot this - David Kassan, one of the finest realist painters today, is doing a free drawing Webcast tomorrow (Tuesday February 15th) which will be *AMAZING*. You'll have to figure out time differences and so forth yourself, but this is one not to be missed.

So a quick line on updates as is usual for the monday in between Scrawls. Hmmmm...

Oh yeah, okay. So there are two *great* art blogs that I think you guys might get a kick out of. I've been reading these guys for an age, but there's no better time to jump aboard.

Leif Peng runs this great blog which is called Today's Inspiration his routes, wanderings and explorations of the last centuries' most talented illustrators are such a fantastic and inspiring read.

Stapleton Kearns, whom you can email with technical questions for his ongoing "Ask Stape" feature where he runs through technical questions, as well as theory and development of colour/light/paint/materials/setup etc, also runs a great blog, here. He recently started a feature called 100 paintings an artist should know, which starts with this link. As he discusses later, it's not totally subjective, but there is always a question mark over what paintings etc. to include in these "lists", but he's making a good case for the ones he's run so far.

Also, he included one of my favourite pictures of the English Rococo - George Romney's Lady Hamilton as Circe, with some background included. It only matches Paul Jamin's, Le Brenn et sa part de butin as pictures that came up during college, were critically panned, but I kind of liked them. :)

If you wander over to my sister's blog and comment in her most recent post, you can be in with a chance to win some crafty goodness!

And for your entertainment needs, try Battlepug! and Ratfist. Webcomic goodness.

So before I hit into the Pub Scrawl updates, I just want to say that Sidebar Nation, whom I was boosting last week, posted an interview with Jaime Hernandez today and you really, really, really should go and download it. You can find it here. Jaime is one of the finest living cartoonists on the planet and the Sidebar guys are *great* interviewers. I haven't had a chance to listen to the download yet, but I'm confident it'll be good. :D

There are copies of the NUIG Art Society's magazine for Muscailt about the city, which features art from the members of Pub Scrawl as well as an awful lot more, but I haven't gotten my hands on a copy yet. It's called Lunatic Fringe! Keep an eye out for more coverage of it both here and around the University and Galway more generally.

The NUIG Comic Book Society has a day long comic & zine festival on this wednesday, almost the whole day in the Aras na MacLeinn. Definitely worth calling in on, you can find details here!

And now, the art! We went with the theme of "Airships" and I like what happened.... forgot my damn camera though, so I had to use my damn cellphone camera. It's meant to be 8 megapixels, but it always comes out with shit photos... oh well. 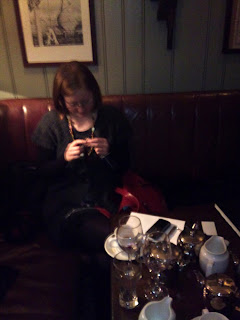 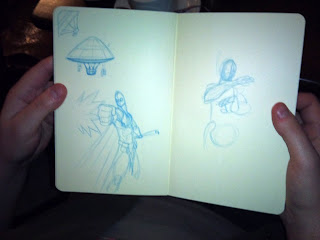 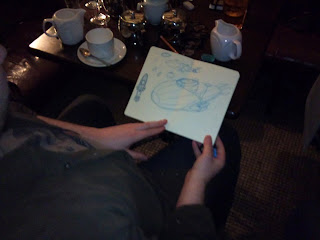 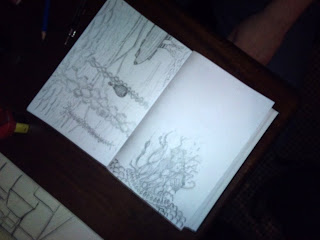 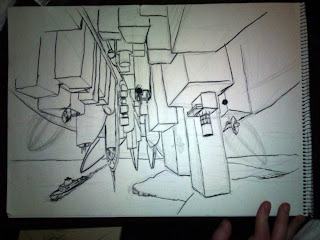 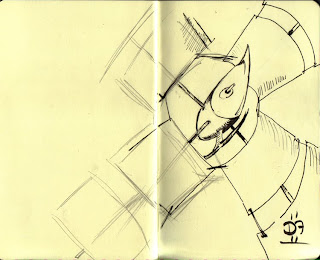 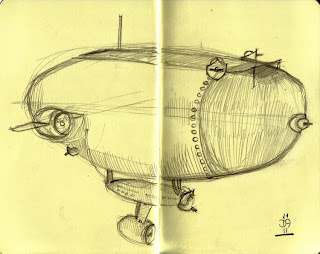