The Galway Fringe Festival seems to have some great stuff on this year! Yolande has recommended "The Art of Mathematics" in NUI,G. There's a craft demonstration on making Teddy Bears on Saturday AND a paper craft exhibit in the Museum that I, for one, am going to go check out.

Our buddies in the Drink and Draw Sligo are back with a blast! Their next meet-up is in the Osta Coffe Shop & Wine Bar on the 19th!

As I wasn't in full speed sharing mode for the last month and a bit, other people put up some cool links in the in-between to keep the group entertained over on Facebook!

Iggy was a champ, posting up some cool videos -

Post by Jamie Pardoe.
And Ger was giving us some inspiring music!

And Mary found some great Hand Drawing (as in, how to draw hands) tips on DeviantArt.

Patrick wanted us to see these pics of a lost traffic jam....

Finally, Iggy found these shaped cucumbers. I don't know what the bottom left guys are meant to be... ?!?

The Drawing Challenge was SO GOOD this year, you guys. I was initially worried about moving it to June, because people don't like change :) but one of the first things I saw pop into my mailbox was this picture from Gordon MacKay, just knocking it out of the park, so I was pretty sure everything was going to be great after that!

Day One - Portrait of a family member 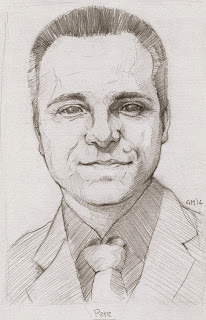 It's already getting hard to figure out variations on the days I've been trying to "keep the same", but the "Opposite Self" day was very fun.

Day Two - Draw your "opposite self" 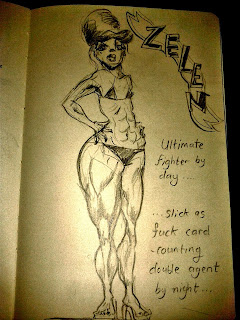 Apparently "The Old Ragdoll" is a reference to a TV show? That was Yolande's intention with the topic, but most of us didn't get it. Anita drew this though, quite lovely - 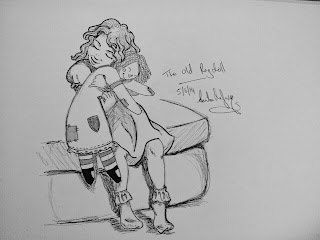 We had epic results on the favourite poem/lyric day, like Mike Dwyer's "John the Fisherman". Definitely going to be a staple of the future Challenges - 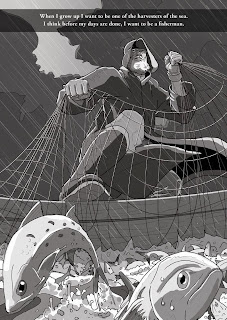 I managed to get waaaaaay more done myself this year than the previous 2 years, and purely by having more fun with the topics, like Day Five - Warrior Fruit/Vegetable 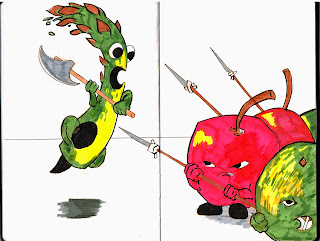 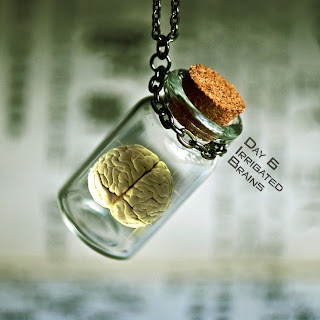 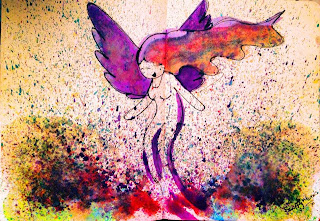 One of the days I was most worried about was the hourly comics day, but it came out GREAT. We had such a range of comics, in all kinds of styles, covering the whole day from Michelle to Ciara.... 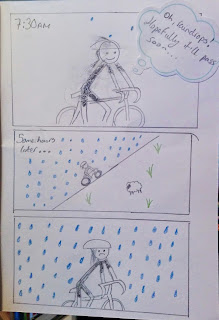 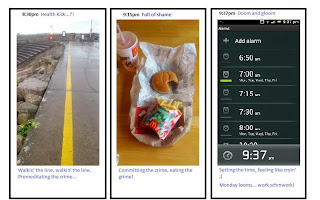 And I spent a long time trying to match topics with their days and dates, like Day Nine - Just another manic monkey (Pub Scrawl #112) This Monkey is by Patrick Rogers. 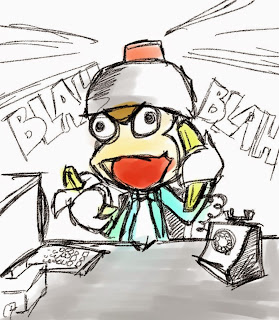 Or cultural references that people might not get? But everyone was onboard with Day Ten - Blood (is the life) (Ger Coady) 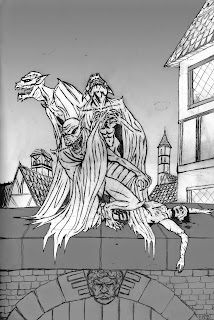 Some people really committed to the full month, which is awesome. Philip Barrett was a champ, producing lots of stuff, like Day Eleven - Scenery/Landscape 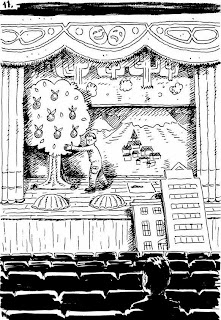 "Were-whatever" on Day Twelve - Were-(animal of your choice) was awesome. Ruth killed it with this one - 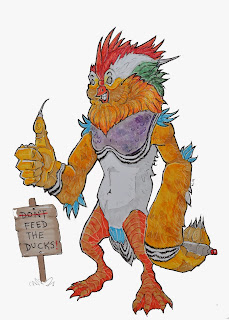 It's always fun to have a topic that sends everyone to Wikipedia! Mary designed some awesome stuff for Day Thirteen - Triskaidekaphobia 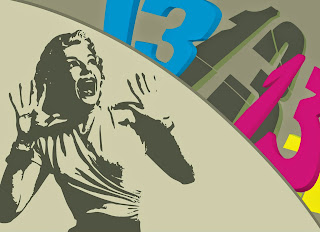 I also loved all our team-ups this time around, like Day Fourteen - The Wizard of Oz with Dr Sketchy's Galway. The pic below is from Mo Keith, but you'll find photos from their sessions on Kerri's blog 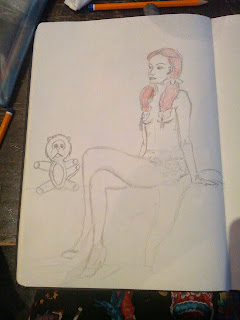 On Day Fifteen - Design a Lady Knight, I encouraged everyone to use Dogbomber's Lady Knight Generator but Aideen killed it with this pic of Caoimhe. :) 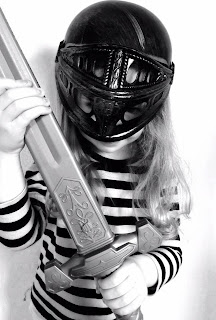 You can see all of Day Sixteen - Fear into Fantasy over on the blog.

I love that people from all over send in their entries for our drawing challenge - Day Seventeen - Favourite Internal Organ featured this amazing spine by Joris, all the way from Switzerland!

And Day Eighteen - Something Gold/Yellow came from Sligo! 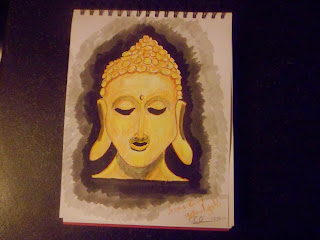 One of the most fun days was Day Nineteen - Choose your favourite possession. Make a Pokemon out of it - expect another Pokemon day next year! 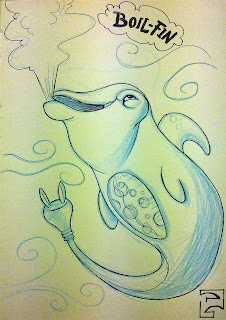 Day Twenty - Something beautiful - there's only one pic that can represent this day! James Newell made me laugh when this email opened up: 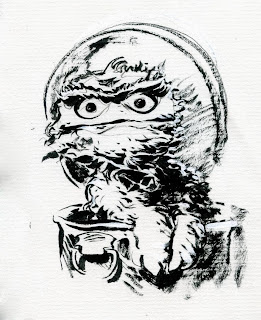 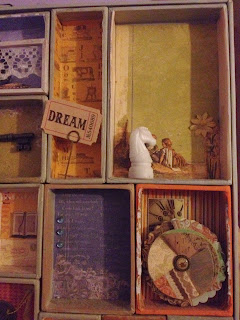 On Day Twenty Two - We made an Urban Sketch with Urban Sketchers Galway. See them on their blog!

Day Twenty Three - Re-imagine a pulp character as a modern day/futuristic character or a Noir version of a nursery rhyme character at Pub Scrawl #113 - Dermo came over the mountain! 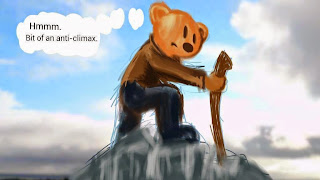 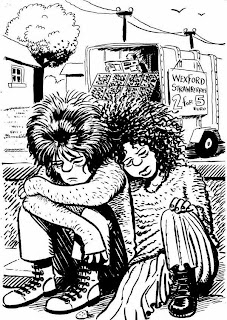 We had more photos this year than before, but less videos... James sent in a great photo for Day Twenty Five - Summertime 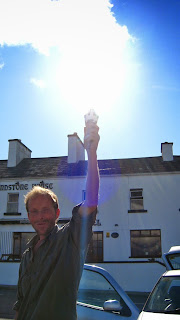 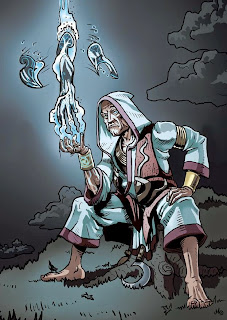 You have to go check out Day Twenty Seven - What if everyday technology was alive? - such great entries, like this one from Gordon MacKay: 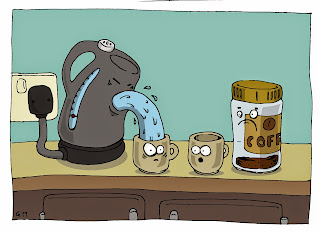 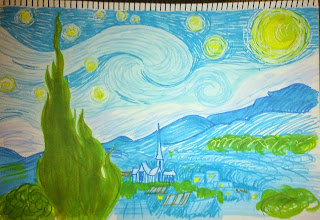 On Day Thirty - Anything you'ld like!, Aideen ruled the day with her "guess the textures" photo! Love it! 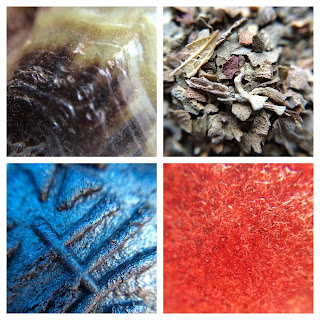 And that was that! We seemed to have less people participating this year, but those that were in were committed, which was great. That said, we might move back to July for next year, just to keep up with everyone's schedules. I'm looking for feedback on it, but I'm hearing that July is good? Post below or message me with your opinions.

SO much coming up before that though, you guys. A monthly Dr. Sketchy's Galway, our fifth birthday, 24 hour comic day, a possible visit to Drink & Draw Cork, a possible exhibition, our culture night collab with 091 labs, but first and foremost, our next Pub Scrawl! #115! Crazy!
Posted by Unknown at 2:55 PM